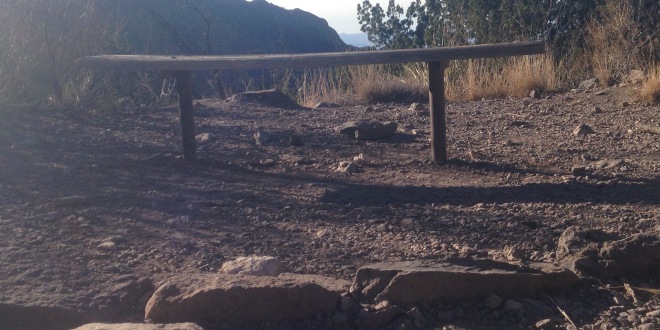 In late January, I traveled to West Texas, to Terlingua, at the invitation of an innkeeper who offers space to writers and artists. As these things often do, the entire experience came together through a delicate mix of resolve and serendipity. A few weeks earlier I had been camping out at her coffeeshop, working after hours on a writing project, when she happened by. We chatted for a few moments and I told her about my long affair with the work and the deadlines I had to face down. She invited me to stay and I just about wept.

Signs, necessary signs, tend to appear out in the Big Bend area. Last summer, I traveled to Marfa for a six-week writer’s residency through the Lannan Foundation. At the end of my stay, I was scheduled to deliver a presentation at the Marfa Book Co. Even though I had the basic outline down, I couldn’t quite get ahold of the soul of the story and I wasn’t going to find it at the desk. With no plan other than to go on a long hike, I drove out to Big Bend National Park and sometime before the trail returned me to the beginning, I heard it.

For me, writing is about sound. The first words come to me like a beat, one often triggered by  activity or motion–hiking, running, cooking, driving, etc. Each time I returned to the Big Bend area I heard the words I needed. Maybe it’s the long drives or the long hikes or that I thrive in harsh territory.

A few weeks later I returned as her guest. One late afternoon, I was deep into a new path when I began to hear words that seemed like the beginning of a postcard to someone who had been with me days before but had since left.

I wrote them all down but stalled at the ending. There is no story without a good ending and I never begin writing without an ending in mind. After some hesitation, I wrote the obvious ending, the only one I could imagine: you were meant to walk. It was my default to remain in motion, and the words had the feel of resignation. Rather than invoking the experience with another, I was writing a condemnation–of myself. I was meant to walk away, move on, always leave. I never sent the postcard.

At the end of April, I woke from a dead sleep with my ending. And that’s when I realized that what I had named “sound” was intuition and the motion was an exercise in transcending chatter and doubt to reach the sound.

A few days later I returned to Marfa and on my first night back, Tim Johnson, a brilliant and gracious writer and friend and co-owner of Marfa Book Co invited me to read a piece as part of their 15 seconds with a poet series.

Here is the postcard with the ending it, and I, needed.

The great Michelle Garcia @__michelle__garcia__ reads a piece written this year in Big Bend. Check out her work at michellegarciaink.com #15secondsinmarfa #15secondswithapoet