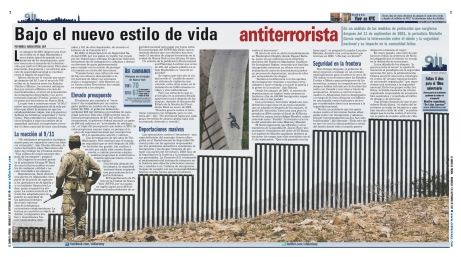 The 2001 attacks carved a deep gash into Lower Manhattan, and scarred the minds of New Yorkers with memories of the collapsing Twin Towers that left 2,753 people dead. Ten years later, the nation can count two wars and a sprawling national security apparatus as a part of the legacy of that bright autumn day.

Less obvious in the calculus of the ‘post 9/11’ world that emerged is the 700-mile fence on the U.S.-Mexico border, the unmanned drones that cruise into Mexico on the hunt for drug traffickers, an unprecedented level of immigrant deportations and one baggy pant wearing baby-faced Mexican kid known as ‘Puebla’—New York state’s first and only convicted terrorist.

What became known simply as 9/11 triggered a reconfiguration in public life, dramatically altering the way Americans travel, fight wars and define ‘security’ and ‘terrorism.’ To understand the massive changes that has unfolded in the name of national security, it is important to recall the national climate of a decade ago

“We were totally unprepared psychologically to be exposed as vulnerable,” said Charles Strozier, the director of the Center on Terrorism at the John Jay College for Criminal Justice. “There was a culture of fear that emerged after the attacks that…now it’s difficult for people to re-imagine it.”

Days later, the U.S. Congress granted President George W. Bush the power to use military force against any entity or nation tied to the attacks. Bush soon declared a war in Afghanistan as part of a mission to capture Al Qaeda operatives and its founder Osama bin Laden who orchestrated the attacks. The controversial PATRIOT Act was adopted which expanded the powers of federal agencies to gather intelligence within the nation’s borders. Torture became the subject of great debate, Arab and Muslim immigrant men were questioned, detained and 531 were eventually deported, according to the 9/11 Commission Report.

In 2002, the Department of Homeland Security (DHS) was created by federal law to house 22 federal agencies including immigration and customs and triggered a gush of government spending to pursue a mission of protecting the nation against ‘terrorism.’

“When you have a culture of fear there is a desperate attempt on the federal level to deal with the threats both real and imagined,” said Strozier, whose Center on Terrorism was created in response to the attacks. “It went 100 different directions at the same time.”

The effort to combat ‘terrorism’ that ensued was backed by massive government spending in the name of security. In 2001, the federal government spent about $20 billion on homeland security measures. This year, DHS submitted a budget request of $57 billion. The federal government also recently announced some $80 billion in spending on ‘intelligence activities’ in one year, triple the budget in 2001. If these programs seem vague, it’s because the national security organ that emerged is as amorphous as it is far reaching.

A two-year investigation by The Washington Post concluded that the top secret world created after 2001 “has become so large, so unwieldy and so secretive that no one knows how much money it costs, how many people it employs, how many programs exist within it or exactly how many agencies do the same work.”

A decade after the attacks, national security remains a major portion of government spending with few signs of abating. The New York City Police Department plans to spend about $24 million in federal homeland security grants to pay for overtime. The NYPD budget lists an estimated $180 million in counter terrorism and intelligence spending for the upcoming year, with one half covered with federal grants. Police Commissioner Ray Kelly recently stated that law enforcement officials have thwarted 13 attempted terrorist plots in the city in the last decade.

The attacks have left an indelible mark on New York City’s cityscape with metal gates and barriers seen throughout the city. A study by the academic journal Environment and Planning A estimated that nearly 40 percent of public space in downtown Manhattan is a ‘security zone.’ This year, the city will unveil the “ring of steel” modeled after London’s surveillance system and consisting of among other things, nearly 2,000 cameras installed in subways and streets.

Indications of what would unfold over the next decade came immediately after the attacks when President Bush in his address to the nation. “Our war on terror begins with Al Qaeda, but it does not end there,” he said. “It will not end until every terrorist group of global reach has been found, stopped, and defeated.”

Terrorism, which is a technique of violence, rather than an enemy, was housed within DHS and alongside with agencies responsible for two ongoing domestic issues-immigrants and drugs. After securing the nation against terrorism, DHS names securing the border and immigration as its top missions. The 9/11 Commission recommended improved screening at borders to detect potential threats and improvements to an “immigration system not able to deliver on its basic commitments, much less support counterterrorism.”

The effect was immediate in Washington Heights where Raquel Batista, then the executive director of the Northern Manhattan Coalition for Immigrant Rights, remembers the immigrant families that overwhelmed her office after a surge of Dominicans in deportation proceedings, many for drug convictions. “We felt the difference with immigration (agents) coming into communities to do raids and knocking on people’s doors in the morning,” Batista said. “People would come to my office and tell me they would come and say they had closed down the street on 179th for a raid.”

Since the 2001 attacks, the number of deportations has tripled with a record number of 400,000 immigrants removed last year alone. “There is a domestic component to the culture of fear–the fear of immigrant,” said Roberto Lovato, an activist and writer who has covered the intersection of national security and immigration. “We imported the fear of Al-Qaeda.”

With the term terrorist left undefined in the state laws adopted after the attacks, the profile of a ‘terrorist’ turned up unexpected face in 2004 when the Bronx district attorney unsealed an indictment Edgar Morales, aka “Puebla,” on charges of terrorism in the killing of 10-year-old Malenny Mendez.

The DA argued that he and the other members of the St. James Boys street gang ‘terrorized’ the civilian neighborhoods of the West Bronx. But Michael Balboni, the Republican senator who sponsored New York’s anti terrorism statute, has said publicly that he envisioned the use of the ‘terrorism’ law in scenarios involving mass destruction and that its use in the Morales case was an “unanticipated application.”
Morales’ parents were shocked at the charge they associated with the 2001 attacks. “What is happening with the laws here,” asked Lourdes Morales, his mother told me in 2005. “Isn’t there a limit?”

Soon after, the federal government began work on a multi-billion dollar 700-mile fence on the U.S. Mexico border ostensibly to protect against terrorists, although suspected terrorists have entered through the northern border with Canada and with visas through airports. Drones used in Afghanistan have been deployed along the border and into Mexico in the fight against drug traffickers who have been deemed a threat to national security.

“It wasn’t accidental that counterterrorism is housed with immigration and customs because conceptually the two had been long linked,” said Strozier. “All of that had to be in the political culture and social culture of fear where people are willing to turn a blind eye.”

Last November, a state appeals court reduced Morales’ sentence saying his crime did not fit the definition of terrorism. The Bronx District Attorney declined requests for comment. Earlier this year an internal report compiled by the Transportation Security Administration found that security screeners at the Newark Airport regularly singled out Mexican and Dominican passengers for scrutiny of travel documents as a way to appear more ‘productive.’

A decade later the ‘war on terror’ fits firmly within the paradigm of national security. In July, the Obama Administration announced a new strategy against ‘transnational organized crime groups” that pose a threat to national security and threaten to destabilize nations. Among the four groups listed was the Zetas, a Mexican organized crime group responsible for countless killings and tied to the ongoing and lucrative human and drug smuggling trade.

A decade after then President George W. Bush said, “the object of terrorism is to try to force us to change our way of life,” one might argue that the fight against terrorism was grafted onto our way of life.